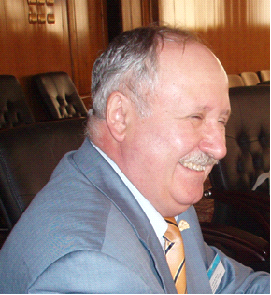 It is with great sadness that we announce the passing of Prof.Dr. Dorel Ailenei, founder member and Vice-President of the Romanian Regional Science Association. Dorel Ailenei passed away, after a tragic accident, on June 3, 2015, six days before his 57th anniversary.

Professor Dorel Ailenei graduated from the Bucharest University of Economic Studies in 1983, with a degree in Planning and Economic Cybernetics. His professional career was marked by a passionate dedication to education and scientific research and by a strong engagement in university management positions, as the Vice-Dean of the Economic University College of the Bucharest University of Economic Studies (1999-2004), Vice-Dean (2008-2012) and then Dean (2012-2015) of the Faculty of Theoretical and Applied Economics within the same university. Dorel Ailenei had a prodigious publishing activity: he worked and co-worked about 25 books and more than 50 articles and conference papers and he directly managed or was a member in numerous scientific research projects. In recent years, he put all his energy into a number of projects aimed to provide scientific mentoring for dozens of PhD and Post-Doctoral students of the Bucharest University of Economic Studies and thus he won not only the respect of the academic community, but also the profound gratitude of many generations of young economists.

Professor Ailenei agreed with dedication to take on leadership or representation positions in professional organisations and to lead as high up as possible the prestige of the Economics profession: he was a founding member and the Vice President of the Romanian Regional Science Association, member for many years of the Regional Science Association International, a member of the National Coordinating Council and the Deputy Chairman of the General Association of Economists in Romania, a member of the European Association of Labour Economists, of the Balkan Environment Association and the International Trade and Finance Association. For his prodigious activity, he received many prizes awarded by the most prestigious scientific institutions in Romania.

Our colleague and friend Dorel Ailenei will be deeply missed by the Romanian Regional Science Association members and by all who knew him and were touched by his genuine sense of modesty, enthusiasm, generosity and by his extremely smart intelligence and humor. We will keep him in our thoughts and prayers for his unconditional contributions to the development and promotion of regional science and we commit ourselves to carry on his model of personal dedication to science and to the art of living beautifully.

May his soul rest in peace!